Top Banks Based on ATM Fees 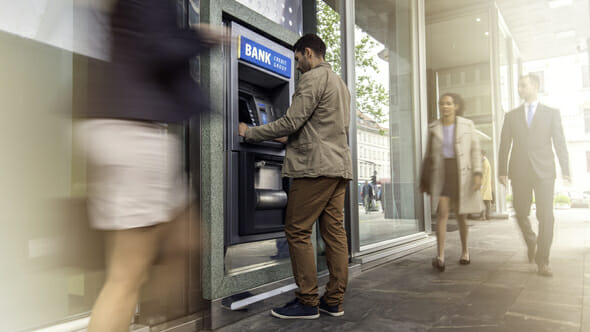 ATM fees, some might say, are a necessary evil. They are not regulated by the federal government, meaning consumers can quickly rack up fees from their checking accounts if they’re not careful. However, some banks are notoriously greedy when it comes to ATM fees.  So we ranked some of America’s most popular banks based on their ATM experience.

Chase is one of the most popular banks in the United States. In 2012, the company brought in approximately $2.3 billion in total assets. However, an account with the Chase comes with plenty of fees. A typical checking account will run you between $10-12  a month, depending on which state you live in. The fees can be avoided if your account qualifies has:

Every withdrawal you make from a non-Chase ATM, they charge$2, on top of the ATM’s fee So, if the prompt on the machine tells you that you will be charged $1.75, the total cost of the transaction will be $3.75.

Or, if you choose to take out money from a teller at a bank other than Chase, 3% of the transactions dollar amount.

One of the most frequent complaints about JP Morgan Chase as a whole is its terrible customer service. It can be difficult to get in touch with a human on the phone. Additionally, their fees aren’t always clearly communicated to their customers.

It may seem like the negative fees associated with JPMorgan & Chase outweigh the positives, but mass amounts of feedback often follows giant corporations. The one benefit to having an account with Chase is they’re everywhere; with 5,940 branches and 15,000 ATM’s nationwide. By simply locating a Chase branch or ATM you can avoid the pesky fees altogether.

Yes, Bank of America has had its ups and downs in the past in regards to popularity, but its undeniable size and power in the United States puts at number two on our list. In 2012, it placed second to JP Morgan & Chase with $2.1 billion in total assets accumulated. According to their Twitter account, their U.S. profits for the 1st quarter of 2013 were  $2.6 billion. However the Bank of America has come under fire recently over egregious ATM fees.

Like Chase, BOA also charges an additional $2 for every withdrawal from an unaffiliated ATM. However, they do charge only $8.95 a month for any e-banking accounts, which is ideal for those who wish to skip the teller and manage their accounts online and through ATM’s.

As recent as last year, the company eliminated 1,500 ATMs across the country, making fees unavoidable for some. Bank of America customers have been vocal about the fees showing up in the monthly statements. According to The Huffington Post, there have been over 20,000 complaints against the company since December 2011. And, lest we forget their failed mission in late 2011 to charge an additional $5 a month for all debit card accounts.

In the year 2012, Citibank brought in $1.9 billion, making it the fourth most profitable bank in America. For checking and savings, they run a flat rate of $10 a month.

They don’t have an exceptionally high number of ATMs with 3,200 to every 1,328 branches across the United States.

Like Bank of America and JPMorgan & Chase, Citibank charges $2 per withdrawal at a non-associated ATM. However, the fee is waived if you have a Citigold account package. The fee is also waived if you have a Student Account Package, which forgives all ATM fees while enrolled in a higher education program.

In terms of customer service, Citibank ranks among the worst in the country. Consumer Affairs has given them a rating of 1 1/2 stars out of 5 for customer satisfaction.

The ratio of highest ATM fees to lowest amounts of ATMs across the country put Wells Fargo at number three. They have 12,000 ATMs nationally, but are spread across 41 states with 6,601 locations.

In 2012 they ranked as the fourth most profitable bank in the country with their total assets calculating approximately $1.3 billion.

This is where Wells Fargo lost major points. They have the highest ATM fee, at $2.50 for every non-affiliated transaction, and a $1 fee for a balance inquiry.

Their customer service has gotten shockingly poor reviews. Disgruntled customers have gone so far as to create a website devoted to posting their miserable experiences. Current number of complaints total 2,000 and climbing.

Now, with this information, hopefully you can make more informed decisions about where to put your hard-earned cash. And remember, local and smaller bank chains have their own rates and fees, so depending on your location and schedule, they could be the answer you’re looking for.

Update: Have financial questions beyond banking? SmartAsset can help. So many people reached out to us looking for tax and long-term financial planning help, we started our own matching service to help you find a financial advisor. The SmartAdvisor matching tool can help you find a person to work with to meet your needs. First you’ll answer a series of questions about your situation and goals. Then the program will narrow down your options from thousands of advisors to up to three registered investment advisors who suit your needs. You can then read their profiles to learn more about them, interview them on the phone or in person and choose who to work with in the future. This allows you to find a good fit while the program does much of the hard work for you.