The Spookiest Cities in America 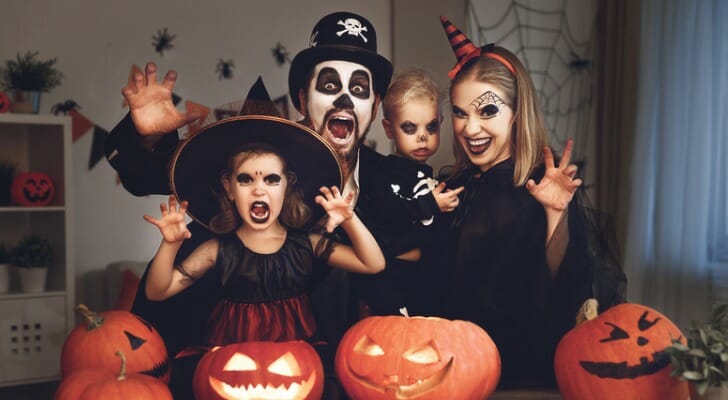 It’s October, the creepiest month of the year, a time when many cities flaunt their ghosts, troubled spirits and haunted houses. But which locale can boast that it’s the spookiest in the U.S.? A cursory internet search for the most haunted cities in America retrieves many claimants while leaving any definitive answer a mystery. After all, there are many factors to consider: the number of vacant houses, grave yards and and costume stores that unleash the ghouls upon the streets. Not to mention the financial pasts that are haunting many Americans’ savings accounts today. 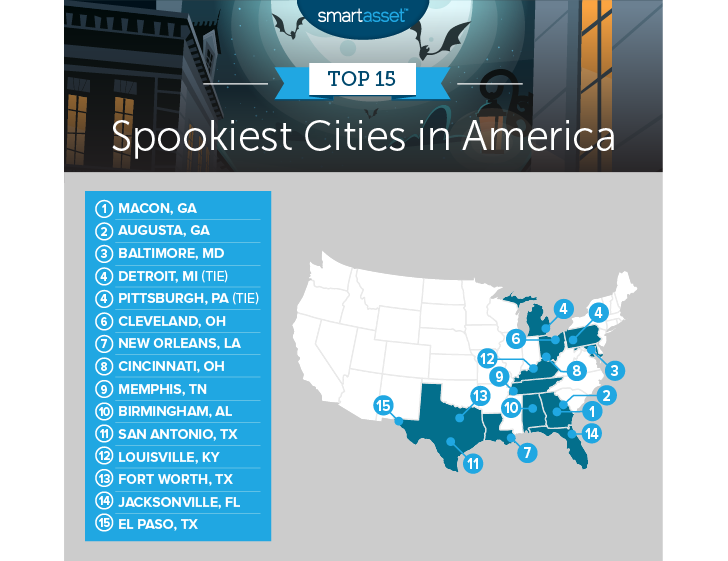 Macon comes in first as the spookiest city in America. This city has a high risk of haunted homes. In fact, for vacant home rate and single-family home rate, Macon ranks in the top 25. Macon also ranks eighth for percent of establishments in the death care industry. What’s more, plenty of residents here are haunted by their financial pasts. And what is spookier than a debt collector calling you in the dead of night harassing you about financial obligations you do not owe? Macon ranks second for zombie debt rate. If you’re looking for haunted places to avoid – or seek out – the Macon Gateway considers the Bennett House, “a 15,000 square-foot Classic Revival home, located on the corner of Georgia Avenue and Nesbitt Place,” to be the most haunted place in Macon.

Augusta is probably best known as one of the most important cities for golf in America. But it’s more than that. It is also one of the spookiest cities in America. Just under 10% of homes here are vacant, a top-15 rate. That leaves them vulnerable to being inhabited by ghosts. Augusta is also full of single-family homes, the favored haunting place for otherworldly spirits. Finally, like residents in Macon, a large number of residents complain of debt coming back from the past to haunt them. Augusta has a zombie debt complaint rate of more than nine per 100,000 residents. Southern Living Magazine even considers The Partridge Inn, located in Augusta, to be one of the 12 most haunted places in the South.

Baltimore needs no introduction as a spooky city. It is where Edgar Allen Poe was inspired to write one of the eeriest poems of all time: “The Raven.” But more than being haunted by the ghost of Poe and his talking raven, Baltimore also has a large number of cemeteries and old homes. Cemeteries are traditionally haunted spots, and so a large number of cemeteries in Baltimore puts the city at risk. Of the housing stock in Baltimore, 57% were built before 1950. As everyone knows, the older a home is, the higher the chance it’s haunted. Many residents here must also keep an eye out for debt coming back from their past and haunting their present. Maryland residents make roughly 8.8 complaints per 100,000 residents to the CFPB about zombie debt.

The Motor City comes in fourth. This city is full of old, single-family and vacant homes — just the type spirits love to haunt. In each of those three metrics, Detroit ranks in the top 25. Along with the high chance of stumbling across a haunted home in Detroit, this city also has quite a few cemeteries: 43, according to Census Bureau estimates. And if it isn’t ghosts or other beings haunting you, it will be people in costumes offering more tricks than treats. Detroit ranks in the top 30 for costume stores as a percent of all establishments.

Coming in tied for fourth is Pittsburgh. Pittsburgh owes its place in the top five to its prominent death care industry, specifically the large number of cemeteries in the Steel City. Ripe for the haunting, the housing stock here is also quite old and large: nearly 60% of all homes were built before 1950 and more than 15% of homes have at least eight rooms.

This city is more than just haunted homes, though. It has the highest concentration of costume stores in the top 10 as well. If you’re looking to tour some of Pittsburgh’s spookiest spots, you may want to begin your search now. The spookiest building in Pittsburgh, as ranked by goodforpittsburgh.com, is the Pittsburgh City Tuberculosis Sanatorium, an abandoned tuberculosis hospital. Plans to renovate the site into housing for the elderly have been approved. That means you soon may not have many chances to visit this haunted space.

Cleveland takes sixth. This city contains 115 cemeteries, according to the Census Bureau’s most recent count. That’s the fourth most in the study. Cleveland is also home to Franklin Castle, considered by many to be one of the most haunted houses in Ohio, possibly even America. Renowned paranormal investigators even searched the home in 2016 as part of their show “Paranormal Lockdown.” On the whole, homes in Cleveland tend to be even older than homes in Pittsburgh. About 63% of homes here were built before 1950.

The popularity of ghost tours in New Orleans is a sign that this is no ordinary city. Your average home in New Orleans is prime for haunting. New Orleans has more empty old homes than your average city. More than that, though, New Orleans is infused with a culture of spookiness. Dressing in costume is popular here, judging by data from the Census Bureau. New Orleans ranks 12th and 13th, respectively, for the density of clothing accessory stores and costume stores. Even the cemeteries here, of which there are plenty, tend to be more haunted than average. Curbed New Orleans ranked the Charity Hospital as the most haunted place in the Big Easy and St. Louis Cemetery No. 1 as the city’s second-most haunted place.

Another Midwest city comes in eighth. Cincinnati ranks in the top 25 for five out of the nine metrics. Its highest scores came in the concentration of costume stores and the number of cemeteries. In each of those metrics, the Queen City scored in the top 15. If you’re looking for a spooky way to spend some time in Cincinnati, the abandoned subway tunnels are a great option. Fortunately, Cincinnati residents, whether on the advice of financial advisors or someone else, have done a great job managing their finances. This city ranks 112th for zombie debt.

Elvis’ spirit is said to haunt Memphis. While we can’t confirm that fact, it is true that Memphis does have a large number of potentially haunted homes. Around one in 10 homes here is vacant, a top-15 rate. Memphis also has 31 cemeteries. During Halloween or other costumed occasions, you’ll likely see Memphis residents dressed in their spookiest outfits. This city ranks in the top 15 for costume store density.

Our list ends in Birmingham, Alabama. This city has one of the most prominent death care industries in the country. More than 0.3% of establishments here are dedicated to death care, a top-20 rate. Along with that, Birmingham also faces a high risk of haunted homes. The housing stock in Birmingham tends to be older than that of most cities, and this city has a high home vacancy rate. The Sloss Fright Furnace is generally considered to be the most bone-chilling sight in Birmingham. 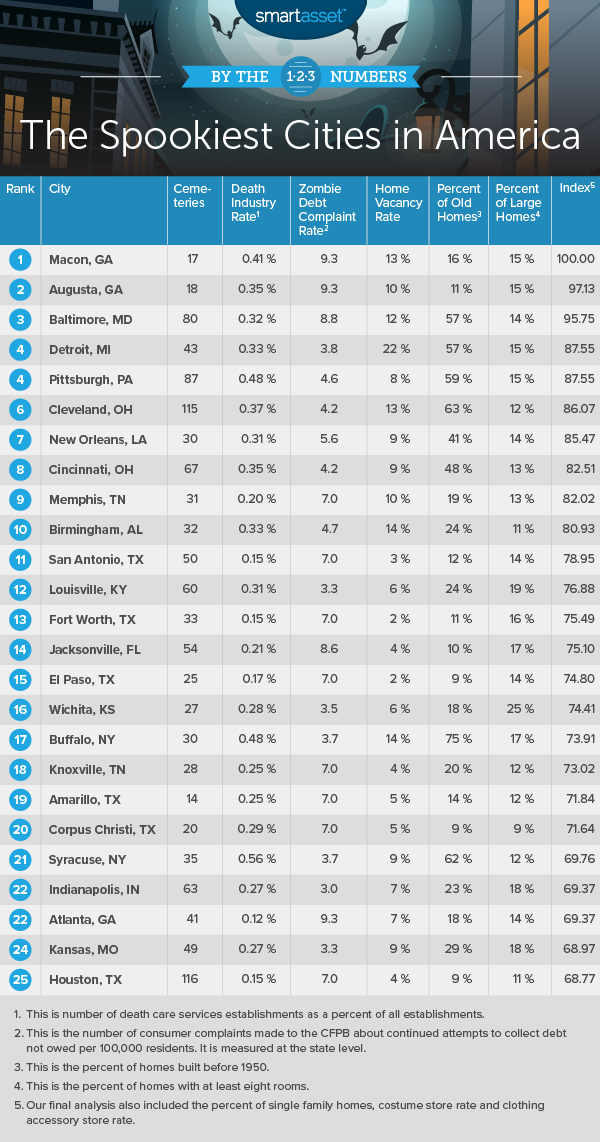 Tips for Not Letting Your Financial Past Haunt You