One way voters demonstrate their support for political candidates is by making campaign contributions, something Americans have increasingly done over the last few decades. According to Pew Research Center, the percentage of Americans giving money to a political candidate doubled from 6% to 12% between 1992 and 2016. That means more Americans are allocating parts of their paychecks or using some of their savings to back the candidates they think will do the best job. It’s a way for voters to put their money with their mouth is and take an active stand in the political process, something that is top of mind during an election year.

With that in mind, SmartAsset decided to crunch the numbers and find the most politically engaged states in the country. Specifically, we looked at voter turnout, registration rates and donation data. For details on our data sources and how we put all the information together to create our final rankings, check out the Data and Methodology section below. 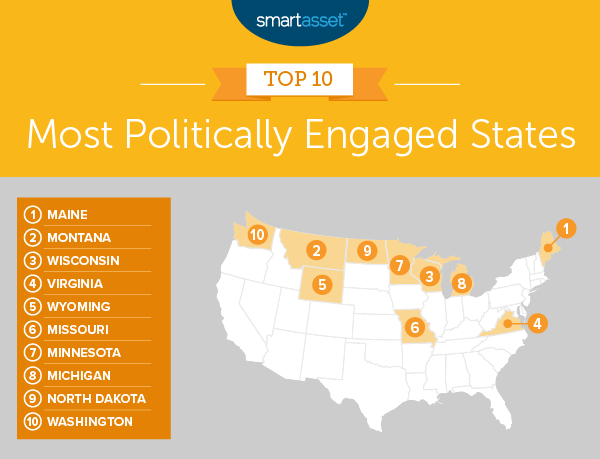 Maine is the most politically engaged state in the country, according to Census Bureau data. It leads the study for voter turnout in both 2016 and 2018 at 71.3% and 64.5%, respectively. The Pine Tree State also leads the study in percentage of those registered to vote in 2018, at 77.1%. Maine doesn’t place as well when it comes to donations, but in no metric does it rank lower than 26th out of 50.

The highest-ranked Midwestern state in the study, Wisconsin has consistently high voter turnout. The Badger State had the second-highest turnout in 2016, at 68.7%, and the third-highest in 2018, at 62.6%. It also has the eighth-highest percentage for its 2018 voter registration, at 70.5%.

Missouri finishes in the top half of the study for all metrics. Furthermore, it ranks in the top 10 for two of the voter turnout metrics we considered: its 2016 turnout of 62.8% and its 2018 registration rate of 70.6%. The state also finishes in the top 20 for both of the 2018 donation metrics, with an average donation of $11.55, comprising 0.02% of earnings. For Missouri residents looking to allocate more money to political contributions, they might do well to use a budget calculator as they make their decisions.

Michigan had the third-highest 2018 voter registration rate in the study, at 71.2%. The Wolverine State also had the seventh-highest voter turnout for that year, at 57,7%. It didn’t place quite as well in 2016, finishing 13th, though its voter turnout was higher that year, 61.8%.

North Dakota ranks well in the voter turnout metrics. It comes in fourth for its 2018 turnout, at 59.8%, as well as for its 2018 registration, at 70.9%. Political donations, though, are a bit of a different story. The state ranks 46th out of the 50 states for average donation per person in 2016, at $6.42, which was just 0.01% of earnings, the lowest rate for this metric in the study. Despite this, the state ranks within the top 25% of the study for its high 2016 voter turnout, high 2018 average donation per person and high 2018 average donation as a percentage of earnings.

Washington State finishes in the top half of the study for every metric. The only metric in which it cracks the top 10, however, is 2018 voter turnout, at 56%. The state also had the 12th-highest average donation that year, at $15.02.

To find the most politically engaged states in the United States, SmartAsset analyzed data for all 50 states across the following metrics:

Tips for Getting Engaged in Your Financial Plan