The Fastest-Growing Jobs for Young Professionals in America – 2019 Edition 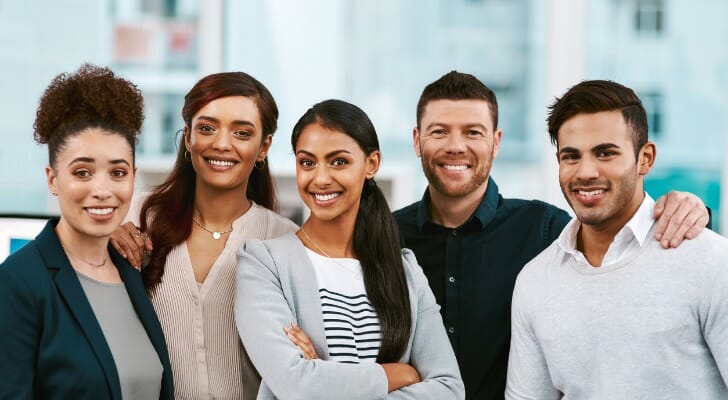 In 2014, there were almost 32 million workers in the U.S. between the ages of 25 and 34, and over five years, this number rose to more than 35 million, an increase of about 10%. Of those 35 million, about 13 million had a bachelor’s or advanced degree, or 16% more than workers who did in 2014. The 16% growth in educated young professionals varies by industry and occupation. Some industries and occupations have seen growth of workers with at least a bachelor’s degree that far outpaces 16% – growth that potentially allows much more flexibility in these professionals’ ability to save enough to meet their financial goals – while others have seen decreases in the number of educated young professionals working the field or job.

In this study, we looked at some of the fastest-growing jobs for young professionals. Using Bureau of Labor Statistics (BLS) data from 2014 and 2018, we ranked percentage growth by occupation for jobs with greater than 15,000 people between the ages of 25 and 34 in 2014, considering only occupations that require a bachelor’s degree or higher. For details on data sources and how we put together our findings, check out the Data and Methodology section below.

Working in nearly every industry, human resources managers plan and coordinate the administrative functions of an organization. With the increased focus on workplace culture across many industries, it is unsurprising that there are more human resources managers than there were five years ago. Between 2014 and 2018, the occupation grew by 33% from 236,000 employees to 313,000.

The growth for both young professionals and women in the occupation correlates with overall growth in the occupation. Over the five-year time period from 2014 to 2018, the occupation overall expanded by about 66%. Nurse practitioners are increasingly able to perform many of the services previously provided only by doctors.

The occupation of environmental scientists and geologists has not grown substantially over the past five years despite increasing concerns about climate change on both local and national levels. Between 2014 and 2018, there was an increase of only 9,000 workers in the occupation, or 10%. However, the job growth for young professionals working as environmental scientists and geologists was about 71% over the five years, perhaps indicating a focus among younger generations on environmental protection.

With the exception of the health-related occupations in our top 10, a number of other occupations – such as database administrators and software developers – are office jobs. However, civil engineers work in a variety of locations and conditions. They typically spend some time working in an office, but they also spend time onsite monitoring operations and solving problems for specific projects. In 2014, there were 89,000 young professionals working as civil engineers, and in 2018, there were 149,000, an increase of 60,000 or about 67%.

The median annual salary for database administrators in 2018 was $90,070. While this is less than the median salary for software developers, it outpaces that of computer systems analysts, $88,740.

Physician assistant ties for fifth with database administrator in terms of job growth for young professionals. Like nurse practitioner, physician assistant is also one of the fastest-growing jobs for women of all ages according to our 2019 findings, ranking eighth in that study.

The number of software developers is expected to continue to grow, with the BLS predicting a strong job outlook for the occupation. The job growth from 2016 through 2026 is predicted to be 24%, which the BLS categorizes as much faster than average, relative to projections for all other occupations.

9. Industrial Engineers, including Health and Safety

Probation officers and correctional treatment specialists is perhaps our most unexpected fastest-growing job for young professionals. In 2014, there were 24,000 probation officers between the ages of 25 and 34, and in 2018, there were 36,000, resulting in an increase of about 50% the five years. This is particularly significant as the occupation overall only grew by about 4% over that same time period.

As a result of the fact that young professional growth far outpaced overall growth of the occupation, young professionals made up a much larger percentage of total probation officers in 2018 than they did in 2014. In 2014, 24% of all probation officers in the U.S. were between 25 and 34 years of age, and in 2018, 35% of them were in the same age range.

To find the fastest-growing jobs for young professionals, SmartAsset looked at employment data from 2014 and compared it to 2018. We considered only occupations that require a bachelor’s or advanced degree and filtered out any occupation that employed fewer than 15,000 people between the ages of 25 and 34 in 2014. We also filtered out any occupation with “other” and “miscellaneous” in the title due to lack of specificity. To rank the occupations, we looked at the percentage change in young professionals employed in each occupation from 2014 to 2018.

All data, including earnings data, comes from the Bureau of Labor Statistics. Employment data is reported to the nearest thousand and growth is estimated based on that reporting.