Cities With the Most Rent Seasonality – 2019 Edition 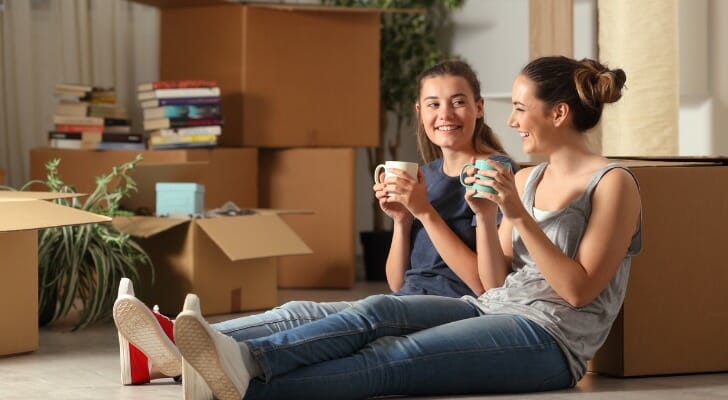 Like home prices, rent varies month to month in many cities. Rent is often higher in summer months than in winter ones, as more than 40% of all moves take place during the four months from May through August, according to data from the U.S. Census Bureau. College students returning for classes, recent graduates starting jobs in new cities and families moving before the start of the school year may all contribute to the high summer demand. But rather than haggling with a landlord when rents are seasonally more expensive, it’s possible for renters to use the calendar to their advantage. With all this in mind, SmartAsset uncovered where renters could save more money by strategically picking when to move.

In this study, SmartAsset considered rent seasonality by city. We compared the average rent for each month from July 2016 through June 2019 in 50 of the largest cities in the U.S. to determine the cities with the most rent seasonality and where renters have the best chance at saving by strategically choosing their rent cycle. We additionally identified the best and worst time of year to rent in each city so that renters can be aware of these patterns as they strategize their next move. For details on our data sources and how we put all the information together to create our final rankings, check out the Data and Methodology section below. 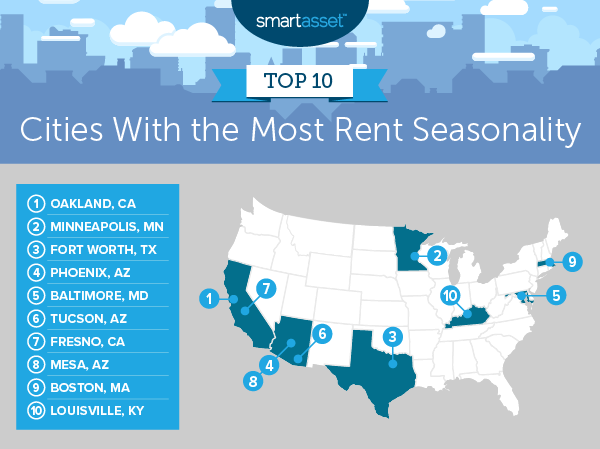 Renters in Oakland, California can save by having a roommate as well as timing their leases. Between July 2016 and June 2019, the average rent in Oakland for a two-bedroom apartment was $2,962, according to Zillow data. The average rent for each month varied by almost $400 over the three years, the highest variation of any city we considered. Specifically, summer renters may want to postpone moving until the fall. Average rent was highest in June, at $3,175, and lowest in October, at $2,798.

Average rent in Minneapolis, Minnesota over the past three years was almost 16% higher in May than it was in July, the biggest percentage difference of any city in our study. Though the percentage difference between peak and trough times was larger in Minneapolis than in the top-ranking city in the study, Oakland, the price difference in Minneapolis is slightly less than in Oakland. The three-year average two-bedroom rent ranged from about $1,700 in July to roughly $2,000 in May, a difference of about $300, compared to a difference between peak and trough of almost $400 in Oakland. And whether or not you’re capitalizing on saving by beginning your lease in July, Minneapolis is a favorable city for renters: It ranks No. 7 in our study on the best cities for renters.

Though Phoenix, Arizona generally has a temperate climate, rent in December tends to be lower than it is in the spring. Over the past three years, the average rent for a two-bedroom apartment in Phoenix was $1,049 extra in December. By contrast, rent was about 15.14% higher in April, at $1,208 per month. That’s the second-highest peak-to-trough percentage difference in the study.

For both metrics, gross change in average rent for each month and percentage change between peak and trough months, Baltimore, Maryland ranks seventh out of the 50 cities we considered. Between November and May, average rent prices have varied by $178 per month, or 13.49%.

Rent in Tucson, Arizona is the least expensive of any city in our top 10. Between July 2016 and June 2019, the average rent for a two-bedroom apartment was $797 per month, according to Zillow data. However, renters may still be able to save by considering the timing of their lease. Average rent was $114 higher in June than in October, meaning that renters could save more than $1,300 on a 12-month lease.

Part of California’s San Joaquin Valley, Fresno has higher rent prices in the spring than in the fall. Zillow data shows that average monthly rent for a two-bedroom apartment between July 2016 and June 2019 was $124 higher in April than in September. While this gross difference is notably lower than many other cities in our top 10, the percentage difference, 14.44%, is the fifth highest of any city we considered.

The third city in Arizona in our top 10, Mesa follows the trend of Phoenix and Tucson with rent prices peaking in the spring. Zillow data shows that average monthly rent for a two-bedroom apartment in Mesa was $938 in August and $1,067 in May. By considering this difference in timing, renters can save approximately $129 a month, or 13.72%.

Unlike most other cities with large fluctuations in rent, Boston, Massachusetts has the highest average rent in the winter. According to our estimations using Zillow data, average two-bedroom rent over the past three years was the highest in January, at $2,592 per month. This is particularly surprising not only because of the deviation from the trend, but also because Boston is known for its harsh winters. Rent in Boston was the lowest in July, at approximately $2,367 per month. Of course, it may well be worthwhile to save where you can in Beantown, as Boston ranks No. 7 on cities that require the most income to pay rent.

Louisville, Kentucky ranks in the middle of all 50 cities in our study in terms of gross change between peak and trough months, as two-bedroom rent prices there are relatively low. However, the percentage change between peak and trough months is the 10th-largest difference of any city. The average rent in December over the past three years was $935, while in June it was $1,059, a 13.24% difference.