Cities Where the Quality of Life Is on the Rise 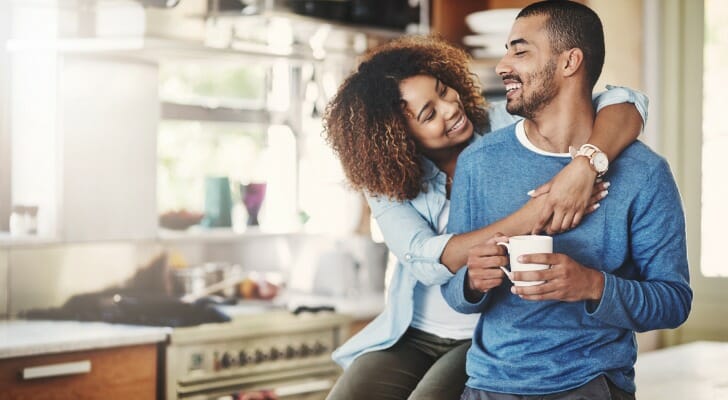 Around 2010 at the tail end of the Great Recession, the Census Bureau estimated that Americans 16 years old or older had an unemployment rate of nearly 11%. As of 2016, that figure stood at 5.8%. But while the economic downturn touched everyone, it did not affect everyone the same. Since then, some places have seen remarkable recovery in poverty rates and unemployment rates. Consequently, residents where things are on the up and up are less likely to be housing-cost burdened and are able to afford to put some money away into savings accounts. Below, we look at these trends to find the places where the quality of life is improving the most.

Below we look at factors like unemployment rate change, poverty rate change, change in employment to population ratio, change in percent of residents who are housing-cost burdened and median housing costs as a percent of income to rank the places where quality of life is on the rise. To see where we got our data and how we put it together to create our final rankings, check out our data and methodology section below. 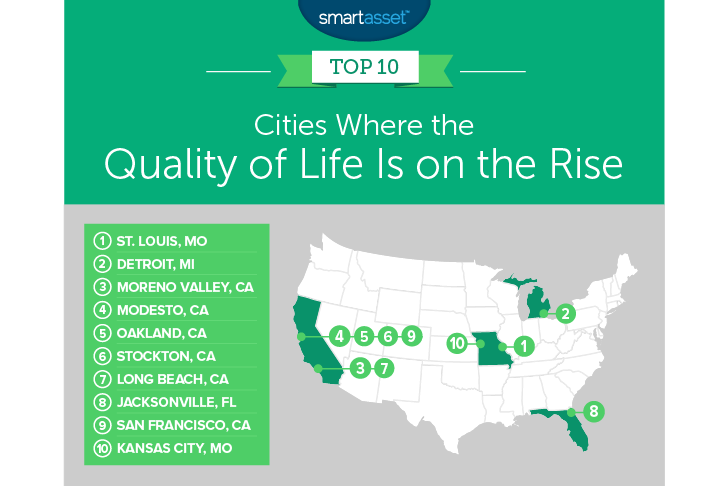 The Gateway to the West takes the top spot. Census Bureau data reveals that from 2012 to 2016 the unemployment rate here dropped from 14.1% to 7%. That is a drop of 7.1%, one of the largest in our study.  A higher employment rate comes with many benefits. The poverty rate here dropped by 5.4%, and more people were encouraged to work. The percent of the working age population who were employed increased by 6.2%.

Detroit has long suffered from the decline in manufacturing jobs. In particular the decline in the automobile industry left the city scrambling for ways to create new economic opportunity.

In 2012 the Census Bureau estimates that the city of Detroit had a poverty rate of 42.3% and an unemployment rate of 27.7%. At the same time only 37% of working-age residents had a job. All those figures improved between the 2012 to 2016 time period. The unemployment rate for residents 16 and over fell by 11%, the poverty rate dropped by about 7% and the percent of working-age residents with jobs increased by over 8%. The reason Detroit falls to second is because despite all these improvements, many residents struggle continue to struggle with housing costs. The housing-cost burdened rate here fell by only 3.5%, from 43.3% to 41.8%.

Modesto, California comes in fourth. From 2012 to 2016 the unemployment rate here fell by 8.4%, a top 10 rate. Along with the growth in jobs, many families here were able to pull themselves out of poverty. The poverty rate in Modesty fell by 7.3%, the third largest decline in our study. With more jobs and income, residents have been able to save more money. On average, housing costs make up 4.4% less of income in 2016 than it did in 2012.

Other than unemployment rate one of the most important metrics which attempt to measure quality of life is the poverty rate. In 2012 Stockton had a poverty rate of nearly 25%. By 2016 that figure had fallen to 18%, which was the fifth sharpest drop in poverty rates in our study. Stockton secured no other top 10 scores but did finish in the top 40 for every other metric.

Florida’s largest city has made remarkable strides over the past few years. The percent of residents who spend at least 30% of their income on housing dropped by 9%, from 41% in 2012 to 32% in 2016. The main reason residents are less likely to be housing-cost burdened are the rising incomes. Median household incomes here increased from $42,800 in 2012 to $51,300 in 2016. Over that same time period hosing costs only increased from $957 per month to $978 per month.

Compared to other cities in this top 10, San Francisco had it pretty good in 2012. Back then, the unemployment rate for residents 16 and over was only 7.7% and the poverty rate was only 15%. While those numbers did improve, San Francisco did not have as much space to improve as other cities. Where things have improved are the housing costs, at least relative to the incomes. Household incomes here have managed to outpace housing cost increases, despite the latter’s much discussed rise. Between 2012 and 2016 the percent of residents who are housing-cost burdened decreased by 8.4% and the percent of income the average household would need to dedicate to afford the average home decreased by nearly 5%. 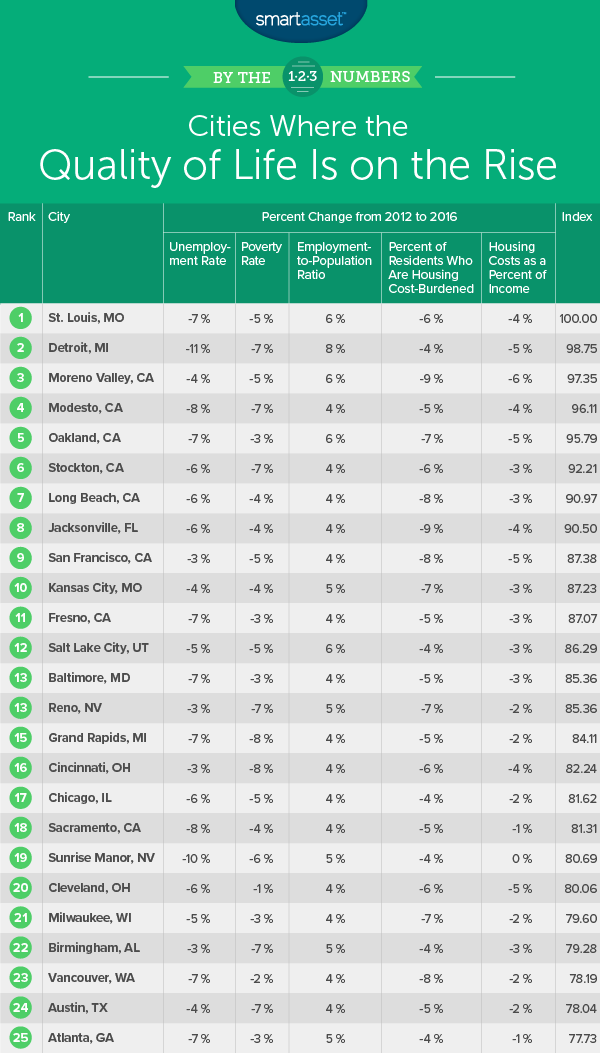 In order to rank the cities where the quality of life is on the rise we looked at data for 150 of the largest cities in the US. Specifically we compared them over the following five metrics: