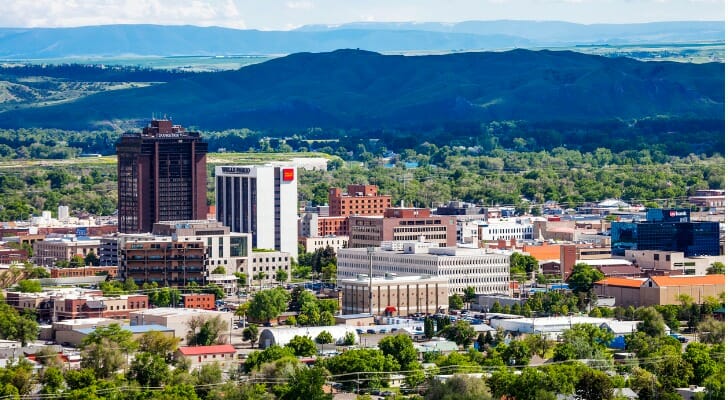 The average American family earns about $55,000 per year, according to Census Bureau estimates. Of course, that’s probably not enough to get by on in America’s most expensive cities, but there are plenty of places where the average American family’s income is sufficient for a satisfying life. These cities offer long-term financial stability by allowing average households to work and save for their future while providing opportunities for these families to enjoy themselves too. Below, we look at metrics related to all these factors to uncover the best cities to live on a $55,000 salary. 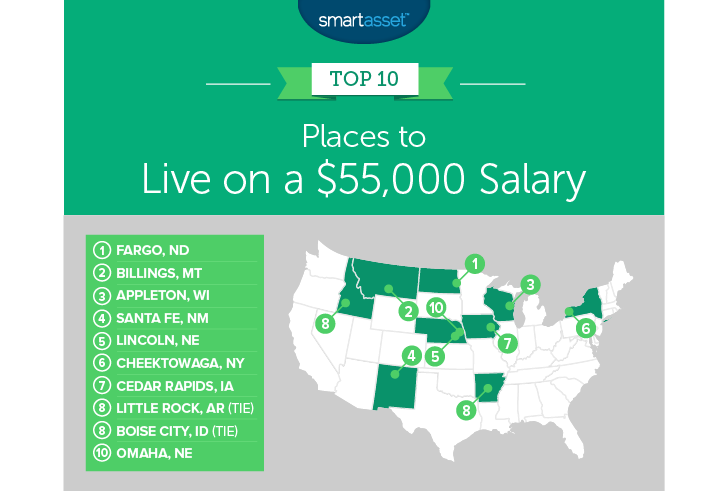 Fargo tops the ranking as the best place to live on $55,000. This city scores in the top 15 in all of our economic metrics, making it a secure place to live and work. For the most part, residents in Fargo don’t have to worry about losing their jobs and falling into poverty. This city has an unemployment rate under 3%. Fargo also scores well in some livability metrics as well. For example, few cities offer residents better commute options than Fargo. The average commute here is under 15 minutes.

Billings ranks highly in our economic indicators, which is why it secured the second spot.  Compared to earning opportunities in Fargo, though, those in Billings are slightly limited. This city ranks 21st for median household income and has an unemployment rate of 3.3%. But for people who place a larger emphasis on entertainment when thinking about livability, Billings may be a better spot land. Billings has nearly 11 entertainment establishments per 10,000 residents, a top-10 rate.

Our list continues with another Midwest city: Appleton, Wisconsin comes in third. This city owes its inclusion in the top three to strong economic indicators and affordable housing. Appleton has the sixth-lowest unemployment rate in our study and the ninth-lowest poverty rate. Finding affordable housing and becoming a homeowner are also more feasible here than in many other cities. Appleton ranks no worse than 20th for median housing costs and median housing costs as a percent of $55,000.

Sante Fe, New Mexico is a great place to live for someone earning $55,000 and looking to maximize quality of life. For starters, Santa Fe has strong healthcare indicators. This city topped all other cities with the lowest rate of preventable hospitalizations in our study. Another perk to living in Santa Fe is a large number of civic institutions. In fact, Santa Fe has the third-highest rate of civic institutions per 10,000 residents in the study. Getting to and from work won’t add additional stress to Sante Fe residents’ busy lives either. Santa Fe has a top-20 commute time.

Nebraska’s capital takes the fifth spot. With an unemployment rate south of 4% and affordable housing, it isn’t too hard to see what makes Lincoln so livable. It should go without saying, as well, that secure employment goes a long way in making a city livable. Only 14 of the cities we analyzed have a better unemployment rate than Lincoln. But a good job isn’t much use if all your earnings go to paying to keep a roof over your head. Fortunately, housing in Lincoln is on the affordable side. The median home in Lincoln costs under $930 per month.

Cheektowaga is the only Northeast city to crack the top 10. Northeastern cities were hurt in this study because of their high housing costs. Unaffordable housing leads to housing cost-burdened residents. In a domino effect, that leads to low savings rates, which can hurt residents’ ability to fund their retirement. Cheektowaga pushes against this Northeast trend. The median home here costs just over $840 per month, the seventh-lowest in our study. Jobs are also plentiful and poverty uncommon. In both those metrics, Cheektowaga secured a top-20 ranking.

Cedar Rapids takes seventh. This city comes in with a median household income of just under $56,100. The average residents in Cedar Rapids should have no problem saving for the future. But even someone earning $55,000 per year won’t struggle with the local cost of living. The median home here costs $877 per month, which is equal to about 19% of monthly income for someone earning $55,000 per year. Cedar Rapids also has a low unemployment rate and a low poverty rate. Cedar Rapids falls to seventh, because it ranks slightly low on other livability metrics. For example, this city ranks 58th for entertainment establishments per 10,000 residents.

You should be able to live a comfortable life in Arkansas’ capital on $55,000. The local median household income is actually above $55,000, suggesting there is some potential to increase earnings. Furthermore, as a capital city, Little Rock offers residents plenty of opportunities to get involved as citizens. This city ranks second for civic establishments per 10,000 residents.

Another capital city comes in eighth. Boise has the second-highest rate of preventable hospitalizations, a sign that healthcare options in the area are pretty good. Boise also ranks in the top 30 for the unemployment rate and poverty rate. In fact, Boise is notable for how balanced its scores are. It only scores in the top 10 once but also only outside the top 50 once. This makes Boise an all-around livable city for people living off $55,000.

Our list ends in Omaha, the second appearance from a city in the Cornhusker State. The median household income in Omaha is $56,400, just a bit over $55,000. Omaha does not stand out in any single metric. Its highest-ranked metric was average commute time. The average commute is Omaha is only 18.3 minutes. But there is also nothing to be overly concerned about when it comes to living in Omaha. Its worst ranked metric was preventable hospitalizations, but even in that metric, Omaha ranked in the top half. 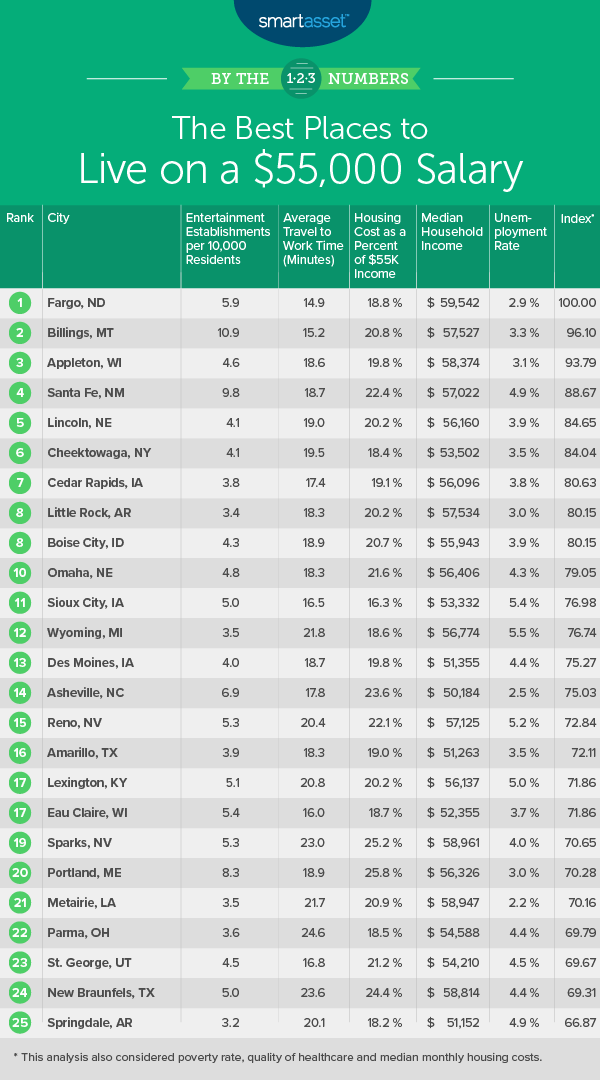 In order to find the best cities to live on a $55,000 salary, we first created a list of all the cities where the median household income was between $50,000 and $60,000. We did this in order to find cities where living on a $55,000 salary was within the range of how the average household lives. This left us with a list of 126 cities, which we ranked across the following nine metrics: