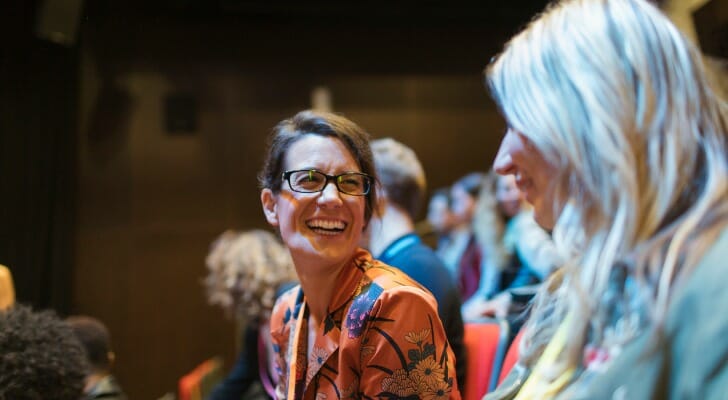 A conference can be a great break from your daily workplace grind. You often get to go to a new city, meet other people in your field and learn new skills. Even though professional development is the goal for many of these events, smart budgeting is critical to keep in mind, as you’ll want to be able to enjoy your time without overspending. On the flip side, if you’re an organizer of one of these events, affordable accommodations and travel time are key factors that contribute to boosting the number of attendees. So finding the right city to host a conference might be a little harder than it seems. That’s why SmartAsset analyzed data across the country to find the best cities for conferences.

To create this year’s rankings for the best cities for conferences, we looked specifically at nine metrics: the number of medium-sized hotels, the number of large hotels, the total number of hotels, the average cost of a hotel, the average cost of a meal in a restaurant, the distance between the airport and downtown, the average travel time to the airport from downtown, the violent crime rate in the city and the concentration of dining and entertainment establishments in the city. For details on our data sources and how we put all the information together to create our final rankings, check out the Data and Methodology section below.

This is SmartAsset’s fifth study on the best cities for conferences. Read the 2018 version here. 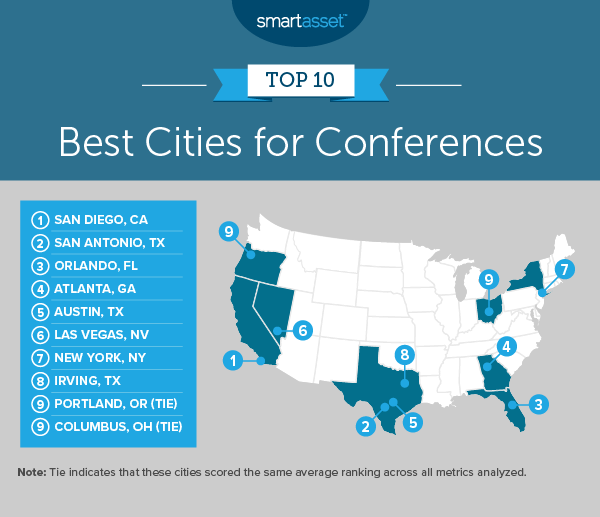 San Diego, California takes the top spot on this list. One of the biggest selling points for conferences in this town on the Pacific Coast is how close the airport is to downtown. It is just 3.6 miles from the airport to downtown San Diego, the shortest distance in the study. Travel to the airport from San Diego’s downtown area takes around 11 minutes on average, tied for third-fastest trip overall. As for accommodations, there are 99 medium-sized hotels and 14 large hotels in San Diego, both top-five rates. This means lots of options to choose from when considering accommodation price points. If you’re already San Diego-based and want make sure your long-term travel and budgeting goals are realistic given your finances, be sure to consult a professional financial advisor in the area.

San Antonio, Texas is second in our top 10, and is also one of the most affordable travel destinations in the country. Even if you can’t squeeze in a trip to the Alamo, San Antonio has plenty going for it when it comes to conferences. It has 349 total hotels, a top-three rate. That includes 87 medium-sized hotels and three large hotels. The average restaurant meal costs $50, and the average hotel room costs $138.

Mild weather and access to Disney World are both selling points for Orlando, Florida. It also has 34 large hotels, the largest amount across all 36 cities we considered, and 275 total hotels, the fifth-largest amount. The average hotel room in Orlando costs $130, and the average three-course meal for two people at a mid-range restaurant is $50. Around 9.3% of all the establishments in the city are dedicated to entertainment.

Atlanta, Georgia comes in fourth place. It has the second-highest number of medium-sized hotels in our study, at 100. In addition, it has seven large hotels and 253 total hotels, also both top-10 rates. The average price per night for a hotel room is $170, and the average three-course meal for two costs $50 at a mid-range restaurant. The airport is 9.2 miles from downtown Atlanta, and the trip will take you 15 minutes on average. Atlanta also nabs the top spot in our study on the best cities for frequent flyers.

Austin, Texas takes the No. 5 spot in our 2020 study on the best cities for conferences. It has the fifth-lowest violent crime rate in this study, at 415 incidents of violent crime each year per 100,000 residents. In terms of accommodations, there are 62 medium hotels, 5 large hotels and a total of 177 hotels in the city. The average price per night for a hotel room is $169, and the average meal at a restaurant costs $50, which will help you save substantially during your stay in Austin.

Conference-goers in Las Vegas, Nevada won’t have any trouble finding things to do. Around 12.2% of all the establishments in the city are dedicated to entertainment, the fifth-highest rate for this metric overall. The airport is just four miles from downtown Las Vegas, and the trip takes 11 minutes. The average price per night for a hotel room is $137, and the average three-course meal for two people at a mid-range restaurant is $60.

New York City has no shortage of accommodations, which makes it an especially good location for large conferences that draw many attendees. New York has a total of 617 hotels, 215 medium-sized hotels and 29 large hotels. New York ranks best out of all 36 cities in our study for both total number of hotels as well as number of medium-sized hotels, and ranks second-best for number of large hotels. Furthermore, 12.2% of all establishments in New York are dedicated to entertainment. The city is expensive, however. The average price per night for a hotel room is $282 – at least $100 more than all other cities in our top 10 – and the average three-course meal for two at a mid-range restaurant will run almost $90.

Irving, Texas takes eighth place in our study on the best cities for conferences. It ranks in the top five of the study for four metrics: hotel room rate, restaurant meal cost, travel time to airport and violent crime rate. Irving has the third-lowest hotel room rate, at $114. Conference-goers will save even more given the low meal costs, as Irving has the lowest cost in the study for a three-course meal for two at a mid-range restaurant – $40. Furthermore, the city holds the fifth-shortest travel time to the airport in the study, at 13 minutes, and the second-lowest crime rate in the study (and the lowest in the top 10), at 227 incidents per 100,000 residents.

Portland, Oregon ties with Columbus, Ohio for the No. 9 spot in our study. A city that is great for young professionals, it ranks in the top 15 of the study for its number of medium-sized hotels, at 64, and in the top half of the study for its total number of hotels, at 165. The city’s violent crime rate is the eighth-lowest in our study, at 516 incidents per 100,000 residents. The average price per night for a hotel room is $181. Portland ranks 10th overall for concentration of dining and entertainment establishments, with about 11.1% of all establishments dedicated to dining and entertainment, and holds a top-five rate for restaurant cost, with the average three-course meal for two at a mid-range restaurant costing about $50.

The capital of Ohio rounds out our top 10, tying for the No. 9 spot with Portland, Oregon. Columbus ties for the fifth-lowest restaurant meal cost in this study – approximately $50 on average. There are a total of 132 hotels, including two large hotels and 40 medium-sized hotels. The average price per night for hotel accommodations is $142. Around 10.7% of the businesses in Columbus are entertainment establishments. 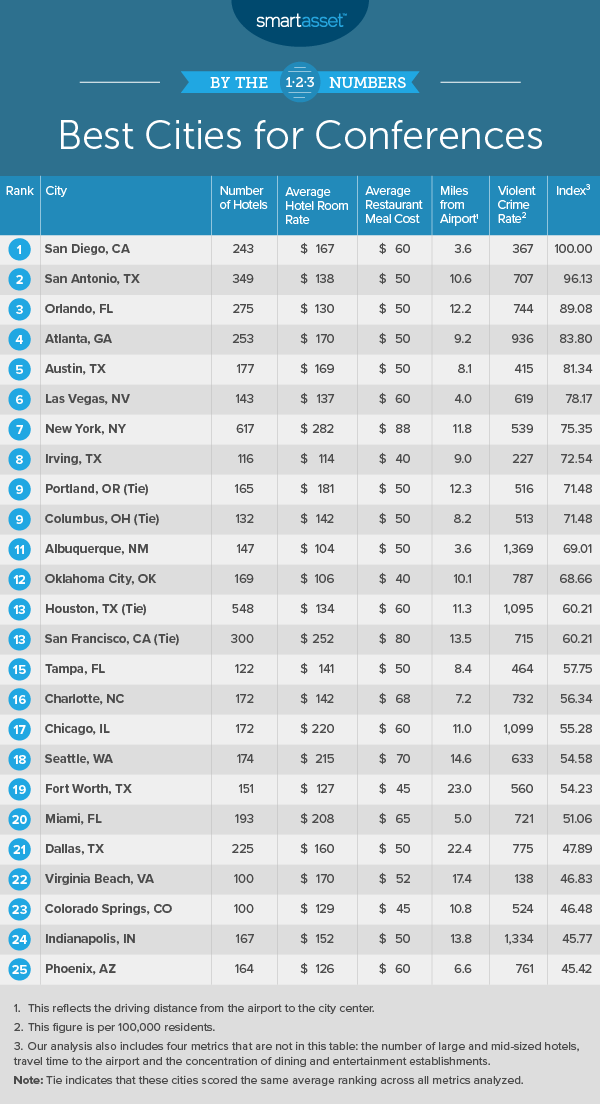 To find the best cities for conferences, SmartAsset looked at data for the largest cities in the country, filtering out any that did not have at least 100 hotels. We compared the remaining 36 cities across nine metrics:

This has previously been an annual study. Due to data availability, we were unable to do a 2019 edition.

Tips for Better Managing Your Investments